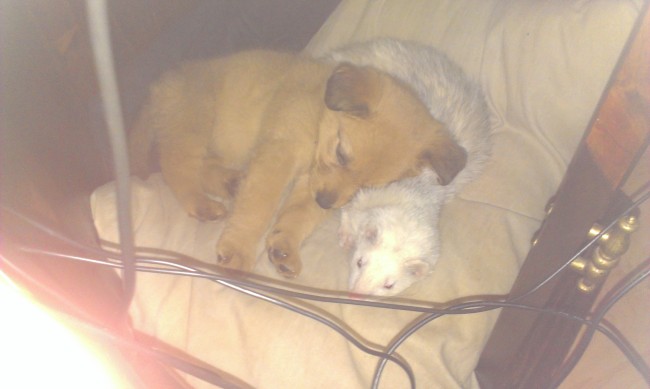 This is me and my little furry buddy, Nelson. He is a ferret. We get to play together sometimes, but my humans say that I am too rough with him so they have to watch us. I like to step on his tail and watch him try to run away on the hard wood floor. Sometimes I will even try to pounce on him, or step on his chest and hold him down. I don’t think I would have to do that if he would just hold still and let me chew on him for a little bit.

I love to eat his food, it is very delicious. But, the humans say that I am not allowed to do that. Typically, I won’t listen to them. When they are watching, I will leave it alone. But if I am home alone or the humans are making the strange monster sounds when its dark, I will eat as much of it as I can (usually, I eat it all but don’t tell anyone).

1 thought on “I Love My Furry Pet Ferret”